On options for the “Voluntary Children’s services Trust’

The future of social work with children and families in Birmingham

On Tuesday you will consider a report prepared by Deloitte on the Birmingham children’s services model which sets out 19 potential models for delivering children’s social care services and a framework of critical success factors which a model would need to meet. The Cabinet report recommends that these different delivery models are appraised by Deloitte over the summer and a report with preferred options should be presented to Cabinet in September.

END_OF_DOCUMENT_TOKEN_TO_BE_REPLACED

Birmingham City Council have stated that they plan to close the much loved Colmers Farm Leisure Centre as part of their budget cuts. Needless to say, the community of South Birmingham are dismayed by this news.

END_OF_DOCUMENT_TOKEN_TO_BE_REPLACED

Combat The Council Cuts Summit In Liverpool On Friday

A summit attended by cities who claim are being hit hard by government spending cuts is to take place in Liverpool on Friday.

END_OF_DOCUMENT_TOKEN_TO_BE_REPLACED

Protecting the most vulnerable? – Birmingham cuts its children’s services

As Birmingham City Council sets its budget for 2013-14, nearly a quarter of the proposed total cuts of £110m falls disproportionately on the Children and Young People’s (CYP) Budget. There are also significant cuts planned to Play and Youth Services which will be subject to £1m worth of cuts over two years.

END_OF_DOCUMENT_TOKEN_TO_BE_REPLACED

An edited version of this letter was printed in the Birmingham Mail yesterday:

Can I encourage your readers to go to the final City Council budget consultation meeting on Tuesday 18th. They should ask Albert Bore if his May 2012 election pledges are being implemented. One of Albert’s pledges was

“Ten of thousands of new jobs and apprenticeships” (emphasis in the orginal) but in October he announced and repeated yesterday at the Yardley consultation meeting is that he is making redundant a thousand people in the Bham City Council.

END_OF_DOCUMENT_TOKEN_TO_BE_REPLACED

Birmingham City Council are facing huge budget cuts which Albert Bore has said means “the end of local government as we know it”.

He will be doing a live webchat through the Birmingham City Council newsroom on Wednesday evening from 6:30pm-7:30pm. Why not get online and ask him to join us in opposing austerity.

The final consultation meeting takes place on Tuesday 18th in the city centre.

There will be meetings and pickets in January as we build to demonstrations in February and March against the cuts that this council are going to implement on behalf of the national ConDem coalition.

Join us to defend our city, to campaign against the failing austerity agenda and for alternatives building towards a sustainable future.

Birmingham City Council have announced the dates for their budget consultations for 2013+ (pdf), following the news that Birmingham’s budget cuts for next year will nearly double to £120m, as further cuts to central government grants are implemented.

END_OF_DOCUMENT_TOKEN_TO_BE_REPLACED

Albert Bore and the Labour Party were elected in May 2010 to run Birmingham Council making the following pledge listed first on their pledge card.

“Our pledges to you

Only six months later the headline of the Birmingham Post is

The article reports Albert Bore justifying the need to sack at least 1,000 Council workers in the next four years.
One may ask where are these “tens of thousands of new jobs..”? Did Albert deliberately mislead the Birmingham public to get elected? The truth is of course he will be axing thousands of jobs rather than creating them.

The article continues on Albert’s plans for many Council services

“All other services, including leisure, sport, culture, libraries and youth provision, are likely to be out-sourced to either private companies or third sector groups.”

As will be obvious there is no commitment in Albert’s pledge card given out BEFORE the election to privatise a large part of the Council services. After the fiasco of G4S at the Olympics why is Albert arguing that services can be better provided by private companies than properly trained Council employees?

Unfortunately this commitment to privatise public services is not new by the Labour Party. Voters in the Police Commisioner election should be clear Ed Miliband has supported the privatisation of all police services except the police constables and other police ranks. 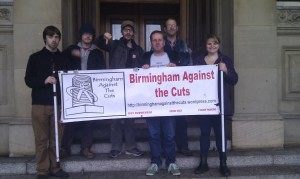 Birmingham’s Labour Party Group have today announced that there will be extra cuts in next years budget, likely to be around £50m on top of the £70m already known about. This will cost at least a further 1,000 full time jobs at the council at a time when unemployment continues to rise in the region. £600m will need to be cut from the budget by 2017 – nearly 50% of the discretionary spending that Birmingham City Council had before the financial crisis.

Speaking on BBC Radio West Midlands this morning, Albert Bore, leader of the Labour Party Group, said this was due to further cuts in grants being made by Eric Pickles, the local government secretary and because previous cuts hadn’t delivered the anticipated savings. He said this signalled “the beginning of the end of local government as we know it”.
You can listen to Albert Bore on iPlayer from 2hr 15min of the Adrian Goldberg show this morning.

Whilst acknowledging that the effect of the cuts will be “horrendous” and bad for Birmingham residents, neither Albert Bore nor the Labour party are actually opposing the cuts, repeating that mantra that we have no choice but to cut. Instead they should be attacking austerity as a policy that is failing to reduce the deficit, has taken us back into recession and is hurting hard working people of the UK. He should be arguing for alternatives to the cuts, for instance arguing for increased spending to create the 70,000 extra homes Birmingham needs by 2026.

The further loss of jobs at the council, in addition to the 4,000 full time posts already gone, could not come at a worse time for a city whose unemployment problems are so bad the government cannot even manufacture falling employment figures using forced unpaid workfare placements.

Further cuts in funding for our careers advice service and other council departments are going to hurt young and vulnerable people in this city, where youth unemployment has continued to rise despite falling nationally.

Tom from Birmingham Against the Cuts added:

Austerity is a failing policy, and increased cuts will only act to hurt vulnerable people in this city with the closure of services such as libraries and childrens’ homes a very real threat. The council needs to be speaking out against central government policy and not simply implementing it without a fight

Losses of up to 1000 full-time jobs have been mentioned which will not only be devastating for those individuals and their families but also for the services that the community relies on.

This will have further devastating effects on our local economy, which is already suffering due to the Government’s failing austerity measures.

The booing of Ed Milliband at Saturday’s huge TUC demonstration against Austerity shows that people in the UK want complete opposition to cuts, and a real commitment to alternative economic policies to produce growth that is focused on creating an environmentally sustainable economy.

Albert Bore will be doing a live webchat between 6:30pm and 7:30pm tonight, do join him and ask what he’s going to do to oppose these cuts for the people of Birmingham.
There will be consultations in November and December before announcements are made for exactly what is going to be cut in next years budget.

Whilst the council is not taking part in the opposition to central government cuts that is required, we need to be taking action. The next meeting of Birmingham Against the Cuts is on Monday 12th November and we will have a speaker from the FBU talking about fire service cuts. We are also planning a demonstration for the Autumn Budget Statement on Wednesday 5th December, when further cuts to government spending will be announced.

An online petition calling for councillors to vote against the Birmignham City Council cuts budget on March 1st has been started.

You can find it here

If you would like a paper copy of the petition, please email birminghamagainstthecuts@gmail.com as I have not yet found a way to host the file on this website.  We will send you a pdf version that you can print out to take into your workplace or pass around your friends.