Latest news in our joint campaign with Communities Against the Cuts

Working together with Birmingham Against the Cuts, the campaign to save the three threatened CAB continues. At the full City Council meeting on December 4th, one of the first items of business was a question read out by Tom Holness of BATC. You can see and hear the question about eight minutes into the first archive video. You will also hear the less-than-clear response from Councillor John Cotton, the Cabinet member for Social Cohesion and Equalities.

Well, he did not say, ‘fair enough, you got me, here is the money’, but on the other hand he did not clearly say no either. So the campaigning and petitioning continues. If anyone can make out exactly what he did say, please get back to us.

Also, here is our latest flyer, explaining the importance of the CAB.

And here is the pdf version, for downloading and distribution.

Petitioning at the CAB in October

A petition gathered in just a few hours by the city centre CAB offices was handed in to Birmingham City Council’s November meeting, ahead of the start of budget consultations in December that will decide how to deal with a near doubling of the cuts of grants from central government.

END_OF_DOCUMENT_TOKEN_TO_BE_REPLACED

Albert Bore bemoans “the end of local government”. However he was aware when elected that the coalition government intended to destroy the services on which people in Birmingham and other cities depend. The question is what he intends to do to stop this.

He talks as if handing over leisure, sport, culture, libraries, and youth provision to the profiteers is already a done deal. No one in Birmingham has voted for this or supports it. [Everyone knows that privatised Harborne baths is the most expensive in the city to use.] Update: That Harborne baths is more expensive is in fact a myth, as Martin Mullaney has drawn our attention to in the comments below. Apologies for our mistake.

Birmingham against the Cuts certainly intends to continue to oppose all cuts or privatisation of services , whether those provided by central government, local government or the health service. We will use all means at our disposal including court action, propaganda, mass activity, and civil disobedience.

If Albert and the Labour Council want to join us they are welcome. They are the council elected by the people of Birmingham and they do not have to go down this road. But if they continue to do the coalition’s dirty work destroying our services we will fight them and we are sure many people in the city will support us.

Perhaps Albert can start by finding the £120,000 necessary to keep open the CABs in Northfield, Tyseley and Kingstanding.

Birmingham against the Cuts 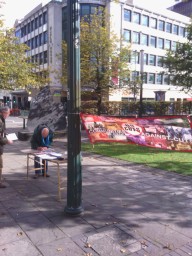 Stall earlier this month in support of Birmingham CAB

Communities Against the Cuts to get the council to fund the £120,000 that Birmingham CAB needs to keep its offices in Northfield, Tysley and Kingstanding will continue with a petition session by the CAB, Gazette Buildings, 168 Corporation Street, Birmingham, B4 6TF on Tuesday 23rd October from 12noon-2pm.

Without this funding, the CAB will be forced to close its offices around Birmingham. The loss of these advice centres could not come at a worse time for Birmingham residents, as welfare reforms threaten to overwhelm advice services even before these cuts and the loss of legal aid income restrict their ability to help people further.

So come and join us on Tuesday, even if just for 20 minutes on your lunch break, and help gather signatures to present to the council to demand they find the money to keep CAB open and stand up to this coalition governments failing austerity agenda.

Stall And Petition in Support of Birmingham CAB – Saturday

Birmingham CAB is facing the closure of three of four offices, leaving just the city centre bureau open for giving advice, as funding cuts in the council budget cuts have left the organisation short of £120,000. Communities Against the Cuts have already gathered hundreds of signatures for a petition demanding the council makes up the shortfall, from residents in south west Birmingham who use the Northfield office that will close, and others have had similar responses around the offices in Tyseley and Kingstanding. We’ll be in the city centre with Communities Against the Cuts on Saturday from 11am-1pm by the city centre CAB offices on Corporation Street.

Birmingham advice services are set to be “overwhelmed” by benefits casework following welfare reforms, and CAB having already seen a 141% rise in casework just for disability benefits in the past two years.
With council tax benefit cuts, a change in sanctions regime for unemployed and disabled claimants, a £50 fine for mistakes on your benefits forms, housing benefit caps and the change to universal credit adding to their caseload, the CAB and other advice services are facing funding cuts and the ending of legal aid for benefits cases.

For Birmingham CAB, funding cuts have left them £120,000 short and unable to maintain their offices outside of the city centre. This means that residents around Birmingham will have to travel further at greater cost on a limited budget to access advice that might meant the difference between a successful appeal for an ATOS or benefits sanction decision and not having enough money for food and heating.

If you can come and help us on the stall on Saturday it would be very appreciated – if you can just pop past and sign the petition that would be great. If you want a copy of the petition to take round your street or put in a local shop, please email us at BirminghamAgainstTheCuts@gmail.com

Latest information on cuts in South Birmingham from Communities Against the Cuts – we’d love to hear from anyone helped by Birmingham CAB. Desperate people need a (preferably local) Citizens Advice Bureau, but this essential front line service is threatened once again.  At present in Birmingham we have the Central one, plus three more in Kingstanding, Tyseley and Northfield, and these last three are facing closure once more. Their funding from the Council was slashed under the ConDem administration in March 2011, and only 50% replaced in October. £120,000 is now needed to keep them on the road. Without that, they are living a week-to-week existence, never knowing if it will be the last. You would think that under a Labour Council, that relatively small amount of money could be found quite easily, but there is no sign of it yet. Instead, the Director has appealed for funds from the public to make up the deficit! Here we have Labour echoing Cameron’s “Big Society”

In response to this very worrying situation, Communities Against the…

Filed under Cuts, Stirchley and Cotteridge Against the Cuts

Last year, Birmingham City Council cut its £600,000 funding to Birmingham Citizens Advice Bureau (CAB), which handles around 120,000 enquiries each year on a wide range of issues including employment, debt, benefits and immigration problems.

For many people, especially those experiencing financial problems as a result of the financial crash, recession and now austerity measures, CAB provide a lifeline with independent advisers ready to help people to sort out their problems in a way which is right for them rather than the banks or energy companies they owe money to.

The outcry over the potential closure of all offices, saw central government step in with £500,000 whilst Birmingham City Council agreed to a meagre £50,000 of funds to allow the CAB to continue its services.
Even so, the CAB made 6 staff redundant, and closed its office in Handsworth, which has the highest level of unemployment in the UK. Now again the whole service is under threat. Financial Inclusion Manager Flo Betts said:

Because of this fresh funding crisis our services are going to significantly reduce.

We will have to reduce our opening hours and we will no longer be in a position to help advise people who come in with all manner of problems from consumer issues, housing problems, employment issues, adoption queries to boundary disputes.

We feel like the charity is living on a knife edge at the moment.

Ultimately it will take just one more cut in funding for us to have to close our offices altogether.

CAB have launched an appeal to the public to try to raise £8,000 a month to keep their service running. We call on the council to set a needs based budget for 2012/13, and to restore the funding CAB needs to continue it services which are all the more vital in times of economic difficulty.
Join us on Tuesday 7th, from 5pm, to lobby the council at its full meeting.

The BBC has today reported that Birmingham’s CAB is set to close after being told that funding from Birmingham City Council will end:

“Many of the areas serviced by our Bureaux rank as the most deprived in the country,” she said.

The CAB’s open door service is maintained by money from the city council, she said.

She added the council had decided to cut all funding used to support free and independent advice services.

The forced withdrawal of service will result in as many as 56,000 people in Birmingham facing increasing problems without access to independent advice.”

Instead, the authority is to designate a smaller pot of money open to bids from the organisations which will be allocated in £50,000 blocks. These will not be available until at least August, she said.

CAB is set to end it’s open door service on February 11th, unless alternative funding can be found.