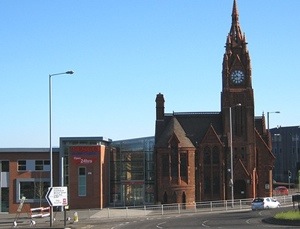 Councillors at the Ladywood District Committee announced they had dropped plans to close Spring Hill Library due to the strength of opposition shown by the local community.
This is a stunning victory for campaigners who have been collecting names for their petition, organising public meetings, and lobbying councillors over the last two months. The petition against closure of Spring Hill obtained 2500 signatories, most collected next to the checkouts in Tesco.

The District Committee said that savings would be found elsewhere, and this raises the danger of moving other facilities into the Library building and reducing the library services, as well as further cuts to play centres or neighbourhood officers.
We say the District Committee should defy the council cabinet and set a district budget that protects all existing services under their control. this is the least which Ladywood deserves.
All power to the campaigners and the community for achieving the lifting of the closure threat. It shows once again that cuts can be defeated if the determination is there.

Spring Hill Library was listed for closure in Ladywood District’s cuts program. The iconic Victorian Gothic a Free Library had recently been refurbished at a cost of £250000 to Tesco as a condition of the development of the new store alongside.

A meeting of 15 outraged residents and users met on January 31st and vowed to fight the closure. A week later a further meeting attracted 30 people. They pointed out that Spring Hill is a thriving library with increasing footfall. On the border of Ladywood and Soho wards, it provides vital library, information, and computer services to two of the most deprived wards in the whole UK. The convenience of combining a visit to the library with a shopping trip means the library is finding many more remote users too.
The secretary to Ladywood MP Shabana Mahmood attended the meeting and advised that the campaign discuss alternative ways of finding the cuts with the district officers, but many people are opposed to a tit for tat approach and just want the decision reversed.
On Saturday February 9th a petitioning session was held outside the library and in Tesco. Hundreds of signatures were obtained and this will be repeated next Saturday. The local support is overwhelming and this is fight that can and must be won.

Bore’s call for a citizen army of volunteers

Bloomsbury Library in Nechells was recently closed following the theft of lead from the roof, the Birmingham Mail reported that an anonymous employee, said: “We were told the library was closing down for good and that staff would be transferred to other libraries.” (Birmingham Mail 28th October 2013)

At Tuesday’s Council meeting Sir Albert issued his call for the citizens of Birmingham to come forward and to volunteer to run local public services that otherwise will be closed as a result of future budget cuts.

END_OF_DOCUMENT_TOKEN_TO_BE_REPLACED

Repayment schedule for the Library of Birmingham loans

A freedom of information response on the physical state of Birmingham’s community libraries has revealed an estimated total repair bill of over £4m. With 20 local libraries requiring repairs of £100k or more.

END_OF_DOCUMENT_TOKEN_TO_BE_REPLACED

Exactly a month after the opening of the new Library of Birmingham the Council published its latest service review which if implemented would decimate the wider library service in the city and lead to library closures.
END_OF_DOCUMENT_TOKEN_TO_BE_REPLACED

Keep the Library of Birmingham public!

As the city celebrates the opening of our new Library of Birmingham an unanswered question hangs over its future.

Sir Albert Bore was asked at Question Time at the Council meeting in July to ‘give a commitment that the Library of Birmingham will remain publicly run and publicly owned for the forseeable future?’

Instead of answering ‘yes’ or ‘no’ Sir Albert gave a politicians answer and referred to the setting up of Strategic Management Board to oversee the new Library. He chose not to directly answer this very clear question.

£188m pounds of public funds have been spent on the development of the new Library and it is perfectly reasonable for the citizens of Birmingham to know whether the Council leadership intends to privatise the running of this service or not.

So in the week that the Library opens we believe that Sir Albert Bore should publicly and unambiguously answer this question on the public record.

Library users will sit on new Strategic Library Board

The Cabinet member responsible for the new Library of Birmingham has conceded that the new Strategic Management Board is unrepresentative of the people of Birmingham and needs to be more inclusive. The Board has recently been set up by the Council to lead the development of the new Library into the future.

Cllr Ian Ward conceded that it should include seats for library users and will urgently consider ways to appoint them to the Board. This concession was an apparent victory for the Friends of the Library of Birmingham who had been challenging the composition of the Board.

The idea of user representation was originally dismissed by Sir Albert Bore at July’s cabinet meeting, claiming that it was unnecessary as one of the Councillors sitting on the Board of eleven had a library ticket!

The move came at a meeting held last week between Cllr Ian Ward and campaigners from the Friends of the Library of Birmingham. The meeting with Cllr Ward took place in response to a request from the Library campaign to ‘call in’ the Cabinet decision to set up the strategic management board.

The Library Campaign has sought to challenge the composition of the new Management Board due to the presence and weight of business representation upon it. Five of eleven seats are reserved to ‘five Library of Birmingham Development Trustees with connections to Birmingham businesses’.

The Development Trust was set up as a charitable body to draw in funding for the Library which would not be directly available to the Council. Trustees have been appointed to the Development Trust with a businsess background and include a member of the Birmingham Post ‘Rich list’ and the CEO of Aston Villa.

The Friends group wrote to Sir Albert Bore before the Cabinet decision objecting that ‘the selection of trustees with such a narrow range of business interests and ethnic backgrounds cannot take forward an inclusive vision of the Library of Birmingham as a cultural resource for all of the citizens of Birmingham.”

The Library campaign requested a scrutiny call-in to investigate the recruitment of the ‘Great and the Good’ to the Development Board to consider possible discriminatory bias. The call-in was refused.

During last weeks meeting Cllr Ward claimed that the Trustees sitting on Library of Birmingham Development Trust had been appointed under the previous Council administration and he could not explain how they had been selected.

But that business people had been deliberately appointed to provide ‘traction in drawing in the money for Library’. Cllr Ward conceded that it was open to question as to how successful the ‘great and the good’ had been in attracting new funding.

The campaigners expressed their concern that the Board might in future propose a future procurement to outsource the Library.

Cllr Ward accepted that the Board could recommend a privatisation but that the decision lay with the Council. He advised such a decision would be ‘hugely controversial’ due in part to the possibility that a private contractor could successfully bid for contract through an open procurement process.

The Friends of the LoB concluded by saying they wanted an unequivocal answer from Sir Albert Bore to the question ‘Can you give a commitment that the Library of Birmingham will remain publicly run and publicly owned for the forseeable future?’ The question which was originally asked at the July Council meeting by a member of the public and followed up in writing, has not yet been answered by Sir Albert.

A spokeperson from the campaign commented “The fundamental facts havent changed, the Mangement Board remains packed with private business people. We will continue to campaign for a ‘citizen-led’ Library with professional leadership from qualified librarians.”

Stand up for Public Libraries in Birmingham

As the Library of Birmingham gears up for its ‘Grand opening’ on 3rd September the Library campaign is preparing for an Autumn of activity
Join us for the following activities:

Our next meeting will take place on 29th August at 7pm at The ICC cafe area and is open to all who support our campaign aims.

Birmingham Against The Cuts
Blog at WordPress.com.