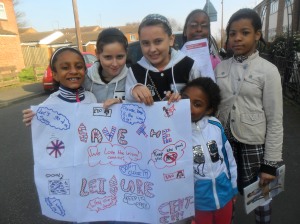 With potential privatisation still looming over leisure centres around Birmingham, we are continuing to campaign, and are asking people to take our petition to their local leisure centre, let people know about the threat and gather signatures to let the council know that we do not want private companies profiting from our public services. We’ve already got hundreds of signatures, we need to make that thousands.

Saturday 21st April is the next day of action, let us know if you can do a stall or petitioning session at your leisure centre and we’ll publicise it here and get other people to come along. Last time there were stalls at Moseley Road Baths and Handsworth, Northfield & Sparkhill leisure centres.

Handsworth Against the Cuts urges all its supporters to use this weekend to get petitions filled in. We have found that people are very willing to sign on the door. Here is Handsworth’s version: (see attachment).

Please deliver petitions to the address given on the petition or contact Alistair 07846490408 or Sue on 07818068856.
We are keen to get the petitions handed in to our councillors ”
Download the petition for Handsworth here

On Monday, Birmingham Central Library changed it’s opening times, closing at 6pm (instead of 8pm) on weekdays and 5pm on Saturdays. The library will now open at 10am.

The council have claimed this is in preperation for the move to the new library, but that is 18 months away, and surely the costs of the move should have been accounted for in the cost of the new library? We think this is a way to make cuts in the library budget.
Libraries around Birmingham are facing cuts, with shorter opening times, or fewer qualified librarians working in them.
These are an important community resource, offering books, learning resources, spaces for people to study and do homework, internet access and many other important services.

We oppose the shortening of library times and the deskilling of the service and will be campaigning on this.
Hall Green Library Supporters have been fighting for Hall Green library to keep its opening hours since we found out about the consultation re restructuring cynically and secretively started in Augus. They have a facebook group here
Handsworth Against the Cuts have been campaigning over the Friday closure of Handsworth Library.

We will be picketing at the central library as often as possible until Christmas, from 5:30pm-6:30pm, collecting signatures for a petition about the libraries.
You can download the petition here.
Please go along if you can – post here or on our facebook page and let people know when you can spare some time. With the German Markets on, this area is very busy. In one hour on Tuesday, 48 signatures were collected, and there is clearly a lot of support for the library. A few people turned up after 6pm to return books, or use the library to study.

We are planning to hold a demonstration on Monday 10th January, from 5:30pm to 6:30pm, after which we will go to the full council meeting that is being held that day.
Come along to this demonstration, and we will plan a campaign to keep all the libraries across the city open for the amount of time needed by their users, and properly staffed so they can serve our communities properly.

The latest activity by Stirchley and Cotteridge against the Cuts was today’s street stall on the Cotteridge island.

We set out our stall in defence of a publicly owned blood service, as part of a well funded and publicly owned health service.
A few years ago it would have been unthinkable that we would have to campaign over such things, but the ConDems are clearly trying to to pull the NHS towards the failed US model of private health care. They are currently trying to sell off the blood and organ donation service.

In response, a new campaign “Save our NHS – West Midlands” is to be set up in about a week’s time. It seeks to build up a local network of people via email, text, FaceBook and leaflets. People should visit ‘Save Our NHS – West Midlands’ on Facebook for the time being. The campaign phone number is 0121 3140607 (24 hour voicemail). The website is not live yet either but will be at http://www.saveournhs-wm.org.uk

As today’s stall showed, our cause is very popular, as is our public campaigning against the city Council cuts. The “pause” in the ConDem offensive is a recognition of how unpopular their counter-reforms are, and we are confident that when we really get our message out, their pause can become permanent.

Reminder; the next meeting of Stirchley and Cotteridge against the Cuts is Thursday, 14th April, 7.30pm at the Stirchley Community Centre.

Filed under Events, Stirchley and Cotteridge Against the Cuts

Over a thousand signatures gathered for petition

In a short space of time, over 1400 signatures have been obtained for the Birmingham against the Cuts petition, which calls for a no-cuts budget to be approved at the Council meeting this Tuesday. At every meeting, street stall, and activity over the last few weeks it has proved very easy to collect names. Often people have been queuing up to sign. If the campaign had been a bit more organised and started its work earlier, the number could have been far higher.

In our experience, it shows the fragility of the pro-cuts mantra of mainstream politicians. When presented with a clear alternative, such as the agenda of the Birmingham against the Cuts, people are happy to support it.

Luckily in Birmingham we do have a few anti-cuts Councillors, for example Salma Yaqoob. She will present our petition to the Council meeting. It will probably be ignored, but it is a forewarning that the ordinary people of Birmingham are not going to lie down and have their services and employment prospects destroyed by the neo-con streamroller

An online petition calling for councillors to vote against the Birmignham City Council cuts budget on March 1st has been started.

You can find it here

If you would like a paper copy of the petition, please email birminghamagainstthecuts@gmail.com as I have not yet found a way to host the file on this website.  We will send you a pdf version that you can print out to take into your workplace or pass around your friends.

Please consider signing this petition to against cuts in the Birmingham Youth Service and distributing the link as widely as possible.