Thursday was a busy day in Birmingham, with a meeting about the privatisation of police, a demonstration at Sandwell Hospital about the use of workfare labour by Sandwell and Birmingham Trust and a public meeting about cuts to railway staff and fare hike rises.

You can read about the police privatisation demo here. 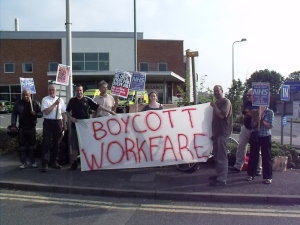 Around a dozen local residents and workfare campaign activists demonstrated outside Sandwell Hospital, where unemployed people are being forced to work for their benefits, undertaking activites such as cleaning and tidying wards and delivering food and drinks to patients.

The demonstration, called on Monday when the story was reported in the Guardian, was well supported by passers by, who expressed concerns about possible impacts on patient care from the £125m cuts faced by the trust, and the use of unpaid labour, people who the trust admitted could face the loss of benefits if they decided that the work experience at the hospital would not be useful to them, or they did not want to risk undermining someone else’s paid job by providing free labour to the organisation. Right to Work have also reported on the demonstration

You can read more about why we oppose workfare here.

Save Your Railways Meeting

A public meeting called by Birmingham Trades Council and the railway unions RMT, Unite, ASLEF and TSSA to discuss the McNulty Report and attached command paper which recommends the closure or reduction in hours of 87 out of 90 London Midland ticket offices (which includes the Centro local railway system). This comes alongside above-inflation rail fare hikes to one of the most expensive (and definitely the most confusing) ticketing systems in the world.

Many stations around Birmingham are looking at being completely unmanned, with only automatic ticket machines available for use – assuming they haven’t been vandalised. This can only lead to people getting the wrong tickets or paying more than needed. No machine can have the knowledge or skill to navigate the huge number of different tickets to ensure that railway users get the cheapest correct ticket available to them.
Having unmanned stations will also lead to increases of crime at stations and no doubt far more litter and graffiti around as well.

The situation may become so bad that the train operating companies or whoever runs the station decides they need people are at the station and get involved with workfare schemes to get free labour to replace the paid jobs, as happened with Finsbury Park London Underground Wardens.

The unions are running a campaign – Action For Rail, and you can get involved with this right now by writing to your MP – go to their site for letter templates and more details about the campaign.

You can watch Mick Cash’s talk in full for more details about the McNulty Report & command paper, and how they will affect your railway services. Start acting now before the staff get removed and ticket offices closed – they won’t be re-opened, just replaced with unpaid workfare labour at the taxpayers expense… and the private railway companies already get far more money from us than British Rail used to cost.