A group of claimants in Birmingham have called a vigil to remember the victims and those suffering from the welfare reforms and culture being created at the DWP. All of you who oppose social injustice in the Birmingham area are invited to take part in commemorative vigil to remember some of the vicitims of companies like ATOS, workfare profiteers like A4e and the Publicly funded Department of Work and Pensions (DWP), all of whom have pushed people over the edge of the emotional abyss. 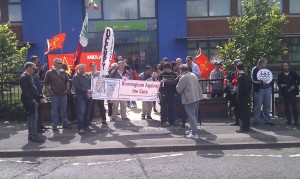 Last June a man set himself alight outside Selly Oak Job Centre due to the stress of the ATOS system and the heavy handed bullying tactics of the DWP, and there have been many other victims who have been stripped on their only source of income. £71.30 is the amount of money many on benefits have to live on per week. At least this subsistance allows for some dignity. When that is removed in traumatic circumstances and often unfairly by the job centre or work programme, It is as good as taking away a lifeline.

Minor reasons are often found for handing out sanctions. It is not the purpose of this article to go into any great detail and individual experience; There are several sites out there and claimants who can attest to the unfairness and lack of reason which some Job centre and work programme advisers use at their discretion. Although there are advisors who will avoid such sharp practice, some follow the dominant culture which exists within the DWP-criminalising the weak and needy in a society while politicians get a 12% pay rise, continue to operate under a generously funded (through tax payers ransom) expenses system and continue to be found lying and cheating and with a straight face in order to continue to demonise the unemployed.

In fact Ian Duncan Smith, the minister who has played a lead role in drawing up the war like tactics to be used against JSA and ESA claiments (some of the poorest people in Britain) has admitted lying on his CV in the past. Yet he is judged a fit person to dictate employment policy which (includes the Job centre dictating how claimants write a CV) and is still referred to as the Right Honourable. many lying MPs keep their job. Even those with criminal record will often find lucrative employment in consultancy work and journalisim (such as Jeffrey Archer). It wont be long no doubt before Chris Huhne finds lucrative employment in the media, as a lobbyist or selling his story for a handsome price.

The aggressive weapons of sanctions, workfare, the Work Capability Assessment (WCA) and many other policies towards unemployed people, disabled people, part time workers and anyone else who depends on the state for support is just a cowardly pretext for further cut backs in public spending. From the cut backs that are happening and changing defintion of the states role in people’s lives, within the public consciousness it seems plausible to believe that many government ministers and the influential rich (such as press barons and retail tzars) just don’t want the welfare state to exist in any shape or form but have not the political guts or political stupidity to abolish it. Without the invention of a time machine to take them back to post war Britain and re-write history they have to tread very carefully. But the path they are treading on (as well as people) is the slow annihilation of all forms of public support.

The aggresive policing by the JCP and interrogation by ATOS of people who have been declared unfit for work by their GP continues unchallenged by the majority of the media and certainly without significant resistance from the Labour Party, who brought in ESA, the WCA and ATOS in 2008. 2,250,000 people have been on the recieving end of sanctions, handed out to reach targets. If the government and the government in waiting (of Milliband) continue to believe the public couldn’t care less or agree that all the unemployed are lazy scroungers and agree with these measures they will continue to bulldoze the welfare state and until there is no public assistance left and society is run at benevolence and needs of the rich in all aspects of society.

Things are bad enough we have quite a small amount of public assistance, all decent education costs and there is very little job security for most people in this country. What remains is not a lot but it needs to protected and it’s only by making it clear to the public and politicians that we can hope to curtail the destruction. And the government can not dismiss those who oppose welfare reform as being just bunch of sad lefties left over from a bygone age if young and old people protest in numbers.

Poverty especially child poverty continues to rise. Foodbanks, once a rare sight, are now being used by half a million people a year – working families struggling as prices rise faster than wages alongside people who have been found fit for work by ATOS or sanctioned by the JCP – a unique situation which has not been seen in Britain since the 1930s and before. People are now forced to rely on the benevolence of the charitable rich, families (if they can rely on that) and some socially conservative religious organisations for basic needs such as food and adequate clothing.

The whole point in a Welfare system is it stops people needing to rely on charity and being at the mercy of the rich and others. Without it and without a fair system, poverty will continue to increase dramatically. The stronger members of society will be in a prime position to exploit the poorer as they did with much impunity in the centuries leading up to creation of a welfare state, which in principle was created to stop such situations arising so easily.

Liam Byrne, the Labour shadow for the DWP, has made no bold pledge to overturn the criminalising treatment of unemployed people nor offered any creative solution to the situation. The last Labour government continued the Tory treatment of the unemployed as scroungers and further developed the link between private profit driven companies who run very basic courses that have not worked in tackling the skills shortage or even increasing basic levels of numeracy and literacy. Waiting for Labour to inherit their turn at power will not solve anything in fact without any real struggle of fightback by claimants and those who support the principles of a fair and supportive welfare state there will be very little left in the wake of the Tories in the way of public support. 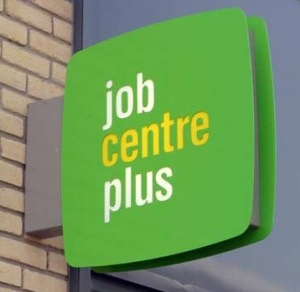 Broad Street Jobcentre is a few minutes walk from the city centre it is on several bus routes and the nearest train station is near Five Ways there are shops and amenities near by and it will be full of traffic most saturdays and shoppers so it is a good place to make a point, hand out leaflets, protest and get the message heard. Remember those who have been victims of the DWP and begin to demonstrate a real spirit to fightback against the evil at work from the likes of Ian Duncan Smith and his collaborating foot solders who will hand out sanctions over a crumb of contention and in a lot of cases cut off the only means that people have to buy any food and pay basic bills. 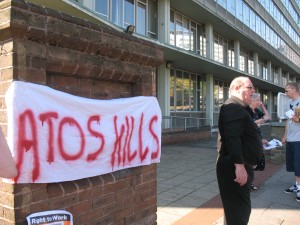 ATOS have their Birmingham assessment centre near Five Ways station, a 500metre walk from Broad Street job centre. This is one of the 20% of assessment centres that do not have wheelchair access – anytime someone with mobility issues who is unable to use stairs comes for an appointment they have to book special rooms downstairs. That should tell you something startling about ATOS and the DWPs attitude towards disabled people.

There will be an open meeting held afterwards, the purpose of which will be to discuss the most effective ways to fightback against the system in place and discuss ideas such as a Claimants Advice Centre or Claimants Union as a vehicle to move forward with, as it is clear that claimants need a support group to fight their corner. Anyone with supportive ideas and intent is welcome to come but please bear in mind that the focus of this action is on the claimants and practical support for people faced with sanctions, ATOS assessments and other benefit cuts or problems. It is not intended to be a meeting to talk about political campaigning, but to build an organisation to represent and support claimants against the increasingly harsh treatment they receive at the hands of the DWP, ATOS, jobcentres, workfare providers and other welfare to work companies pimping their way to huge profits off the back of poverty.

The event will be outdoors. The nearest accessible toilets are in the cinema opposite the job centre, or at bars and restaurants along Broad Street.

If you have any accessibility needs or requirements please contact brumprotestor@riseup.net