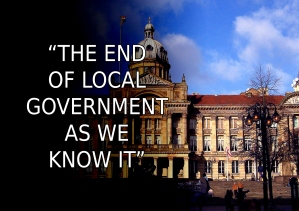 Albert Bore’s Jaws of Doom have just had a few more teeth added to them as Osborne announced that local government funding will be cut by a further 10% in 2015-16, a cut that the national Labour party have already agreed they will keep, leaving any hope for an alternative to austerity after the next election in the hands of other parties.

Birmingham City Council was already going to lose half of it’s discretionary funding by 2016/7, now even more of that will go, further threatening council services which are completely under review as Bore tries to draw in the local population to taking part in implementing cuts by starting with a blank sheet of paper where we are supposed to say which services should be retained and which should be lost.

The cuts being made by Osborne will further add to the woes of adult care services – facing £75m less money in the next 3 years; of children’s care services – being drastically cut back with the hope of fostering taking up the slack; of the highways department and local road repairs (PDF Appendix 5F, p218); of waste collection which has already been suggested might move to fortnightly or even monthly collections; of youth centres and Connexions and the libraries and swimming pools which are facing closure or privatisation; and of almost every other council service currently provided for.

Any services or benefits that are being moved to local government are being done so with cuts that make those services less effective and less valuable than before. For some reason the Tories reckon that you can provide better services with less money. Bizarre logic. That is not to say that there isn’t any inefficiency and waste within local government (the Service Birmingham IT contract with Capita springs to mind), but the idea that this waste and inefficiency makes up more than 50% of council spending is quite odd.

Meanwhile ordinary people will suffer. People needing advice will have nowhere to go as Birmingham Law Centre has now closed and the CAB is struggling too. The council’s own advice services are being cut back as well. Recession, cuts and reforms mean these services are needed more than ever. Add into that less frequent waste collection, more potholes, more litter on the streets, worsening children’s and adult care services, more deprivation, more unemployment, less help and support available and the picture is pretty bleak.

It was not ordinary people who caused the crisis which created the deficit and debt that we now have, but it is ordinary people who are paying the financial and social costs of it. Bankers go unpunished, the £120bn tax gap is still wide open, bonuses and mansions haven’t had extra taxes placed on them, there are more millionaires than ever and the richest keep getting richer. In short, austerity rewards the people that screwed us, and punishes the hard working people that keep this country moving.

What we need is an alternative economic strategy – one that makes those responsible for the crisis bear the heaviest burden, and supports those in the most need whilst creating some of the infrastructure that we need to move past climate change and oil dependency. None of the three main parties offer any alternative, so any change must come from outside of parliament. Join us and make that change reality.