A report presented to this week’s Birmingham City Council Cabinet puts numbers and places to the horrific impact of the bedroom tax and benefit cap.

8779 council owned properties and 5600 social landlord properties are under-occupied according to the government criteria. Over ¾ of the tenants of these homes will lose between £10 and £20 per week in housing benefit and ¼ will lose over £20 per week (max £30).

Those affected are spread right across the city, but the worst wards are Nechells, Kingstanding, Aston, Shard End , Kings Norton and Weoley.

The report contains the following table showing the housing required to move everybody into the “right” sized properties. It is glaring that 5200 extra one bedroom properties would be needed and the city would have exactly 3 available! This illustrates the complete vindictiveness of the bedroom tax. People are being penalised for not making a move which is impossible. BATC needs to investigate the legal implications of this.

The benefit cap will affect a much smaller number of households, but much more drastically. 2116 individuals in 1351 households will have their benefit cut by an average of £88 per week. Many of these will also be affected by the bedroom tax. Based on postcodes of households affected, the report estimates that 60% of families with capped benefits will also be hit by the bedroom tax and 41% are already on the “troubled families” register. In other words it is the most deprived families in the city and their children who will suffer the most.

The areas affected are also those that are struggling already and the least able to cope with new problems. The effect on the local economy will be drastic with about £20m per year in benefit cuts which would have been spent in local shops.

BATC urges the council to avoid evictions by writing off arrears accumulated or reclassifying properties as has been done by other local authorities , We will be organising to stop evictions if they are attempted. 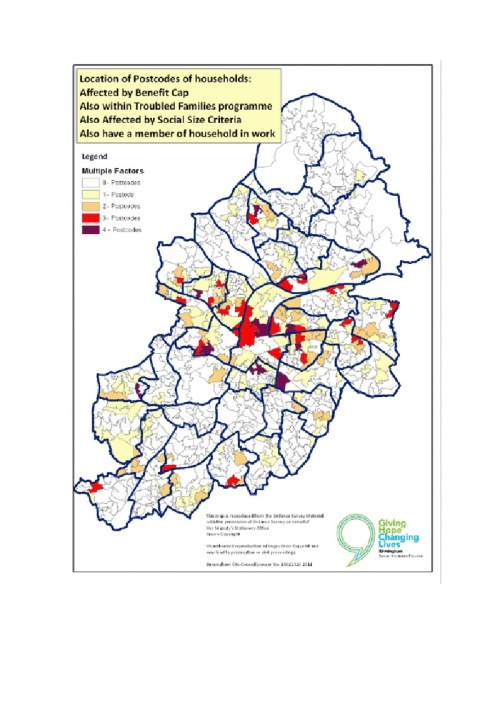