On Wednesday, the PCS Union who represent civil servants, began a series of industrial actions and strikes to defend jobs pay, conditions and pensions from this government’s austerity agenda. In Birmingham pickets were held around the city at government offices and job centres. Turnout rates in the region were at 80%-90% for many places, with over a third of the staff at Selly Oak Jobcentre turning out for the picket line itself.

Pickets were followed by a lunchtime rally at which Sian Ruddick read message of support before introducing the speakers, which started with Phil Murray, a worker at the Selly Oak Jobcentre 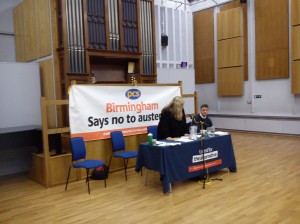 This is just the start of a series of actions, with the next strike on the 5th April as the new tax year starts. Wednesday was chosen as it was budget day, with George Osborne revealing plans for new welfare cuts, subsidies for buying second homes and deceptions about the budget deficit.

Next to speak was Kit Armstrong from the NUT, who delivered a message of solidarity from teaching unions who will be going on strike in the Summer.

this government is systematically dismantling our school structure in front of our eyes … [they are] stealing the schools, never mind the milk, and handing them over to their friends in big business

Then the regional secretary from the TUC, Rob Jonston spoke

We’ve said for the past 3, 4 years that austerity is self-defeating and time and time again we’ve been proven right

Yesterday, unemployment figures showed a rise nationally and locally. GDP is looking likely to shrink again this quarter, meaning we’re in a triple dip recession – all as part of the worst recovery from recession in over 100 years. Osborne claims that the deficit is down by a third by using one-off payments and delaying some spending by a few weeks so it shows up in next years budget to make it so that the deficit for 2012/3 is £120.9bn – lower than the defict for 2011/12 by just 100 million pounds, and in reality higher, as his austerity policies choke off growth, real wages fall to 2003 levels and part time jobs replace full time jobs.

Tom, a local campaigner with UK Uncut and Boycott Workfare spoke about how PCS had worked in solidarity with campaigns, and called for PCS to do more to fight sanctions and welfare reform, warning job centre staff that

remember that when universal credit comes in later this year, any part time workers will be facing the same conditionality as unemployed people, so you might find yourself working alongside someone one day, stopping their benefits the next.

During the debate on the retrospective workfare bill that robbed £130m of sanctions from claimants who were unlawfully sanctioned, Mark Hoban (the minister for unemployment) repeatedly told the house of commons that there were no sanctions targets. However today the Guardian has revealed leaked emails that prove that targets are in place to sanction people at job centres. The PCS must look at this and members must resist – sanctions cause hunger, debt and increased risk of homelessness and are used to divide workers from claimants. 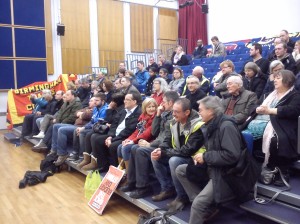 The PCS Regional Secretary, Chris Bough finished the rally with a storming speech about the attacks on the civil service, the public sector, our economy and communities and the alternatives that we should be implementing instead of self-defeating austerity

PCS next action is on April 5th. Join the facebook event and show your support and solidarity.

2 responses to “Report From PCS Strike”