Hundreds Turn Out For Bedroom Tax Demo In Birmingham

Hundreds of people came out to demonstrate against this coalition’s unpopular bedroom tax policy. One of the biggest anti-cuts demonstrations in the past couple of years saw the two sides of the Labour party speak in between amongst community activists and people affected by the bedroom tax, as John Mcdonnell MP and Liam Byrne MP both addressed the crowd – to rather different receptions.

Unite the Resistance and DPAC have called a public meeting on Thursday 28th March to discuss and plan further resistance to the bedroom tax and building a general benefits justice campaign in the city to draw together the groups that have been united by being affected by the bedroom tax.

This demonstration was part of a national day of demonstrations that saw over 50 towns and cities hold actions. This day of action was called and organised by Labour Left activists, but in Birmingham, Labour did not get an easy ride, as speaker after speaker attacked Labour for their dreadful record on social security – they introduced workfare as part of the New Deal Scheme, they brought in ATOS and the Work Capability Assessment in 2008, Liam Byrne is part of the Progress group that supports benefits sanctions, workfare and the “biopsychosocial model” of disability that underlies the changes to disability benefits that are leaving disabled people without the support they need and deserve.

John McDonnell showed the other side of the Labour party, as he called for people to stand up against this measure:

People are coming together around the country to stand together against the immorality of this government.

He called for Labour councils to follow the Scottish National Party in Dundee and Greens in Brighton and Hove and to refuse to evict people affected by the bedroom tax and called for communities to come together and occupy homes to prevent the bailiffs from throwing families out onto the streets.

Liam Byrne on the other hand gave a speech about how Labour will repeal this and don’t worry Labour are on your side. He was roundly heckled for his speech, which could be summed up as “don’t worry, let your politicians sort this out for you”, but we know that Labour are a neo-liberal party, committed to austerity, and will not help us unless or until they feel the pressure and see the votes, as they have with the bedroom tax.

In between the politicians, two people told us how they were affected by the charge. Both are disabled. One has his son living at home, and has been told under the regulations that his room is considered spare, and even his MP can’t believe it. The other lives in adapted accommodation. Both face the prospect of finding 14% of their rent out of the £71-110/week disability benefits they receive, which already hardly stretch to covering the increasing costs of food, gas, electric and transport.

Further concessions are being made on the bedroom tax, as Iain Duncan Smith more that doubles the Discretionary Housing Payment fund, adding £36m to cover the charges placed on families with disabled children who cannot share a room with their sibling. This will also affect disabled children in private accommodation who have faced problems since Labour introduced size restrictions on rents in private properties in 2009.

These concessions, along with those for foster carers (but only those with one foster child, not two or more) and for army personell away on duty, show that people are starting to wake up to how badly thought out this charge is, how many “spare” rooms aren’t spare, and the injustice of forcing someone who has lived, worked and raised a family in a community to move away from their friends, neighbours and support network. 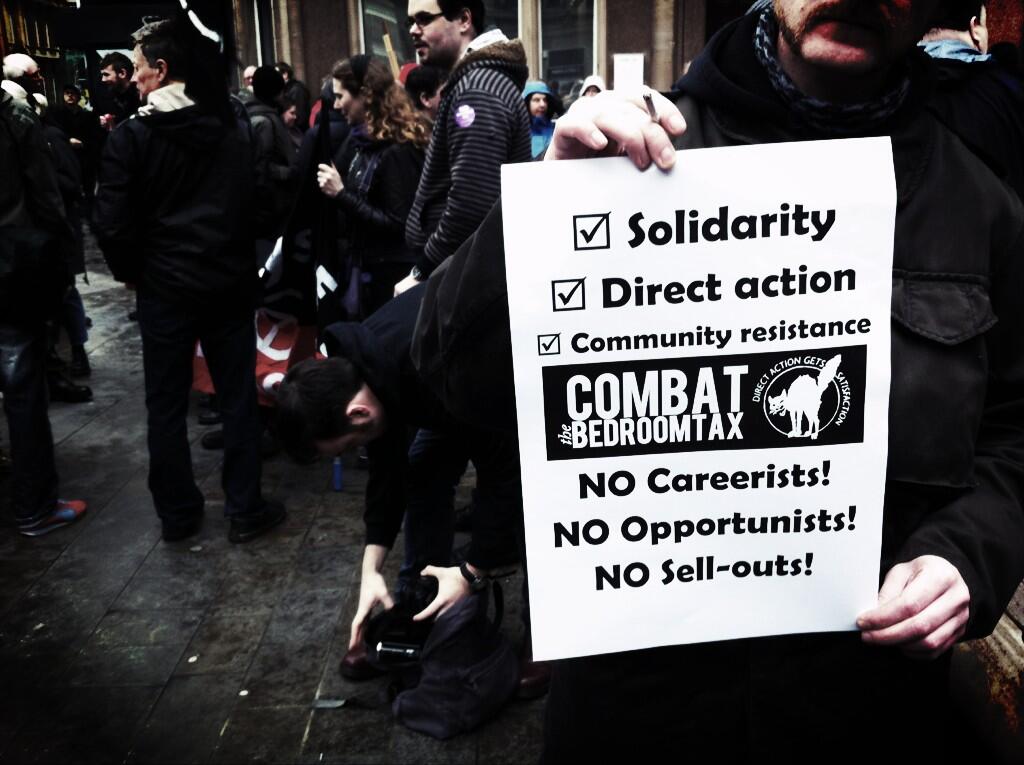 The only way we’ll defeat the bedroom tax!

This tax won’t be stopped from coming in on April 1st, but we can stop it by coming together in our neighbourhoods and communities to defend those who can’t or won’t pay the charge, whose rooms are not spare or shouldn’t be forced to move by physically occupying and surrounding properties to prevent bailiffs from evicting families.

The poll tax wasn’t stopped before it started, it was stopped through mass non-payment campaigns and through militant and large demonstrations. We can do the same with the bedroom tax.