The Labour group met yesterday to agree internally their budget proposal which accepts the £110m of cuts to the council budget as a result of the Tory coalition slashing central government grants. The full council meets on Tuesday 26th February to discuss and vote on the proposals put forward. In protest at the cuts and the Labour group’s decision to implement them on behalf of the Tory coalition, 20 people occupied the council house balcony from lunchtime until 6pm, and a demonstration of around 200 people marched up New Street to the council house where the meeting took place. There was coverage of these actions in The Birmingham Mail and BBC Website.

As well as the Labour Group meeting yesterday, there was also the announcement from Eric Pickles that the cuts in government grants would be larger than previously expected. The cut will rise from 25% to 33%, widening Albert Bore’s jaws of doom (the amount that will be missing from the £1.2bn discretionary budget by 2016/7) from £600m to as much as £700m. With councils around the country rolling over and implementing these cuts without any apparent resistance, can it be any surprise that they have been targeted for more? The question must also be asked, if the cut increases further, to 50% or 75% or even completely, will there come a point when Labour turn round and say no, we are not going to do this?

These were just the start of actions calling on the Labour group locally to defy the cuts and set a needs budget – doing this would delay any cuts by months as formal procedures are worked through, could lead to central government reducing or reversing cuts to meet the budget demands and would provide a solid point of resistance to cuts, increasing the pressure on other councils and the national Labour party to oppose cuts and austerity, rather than supporting the idea that there can be fair cuts or that cutting slower would be a good thing.

Any cut in spending during the worst recovery in over a century will have a negative impact on the economy, as we have seen over the past year where zero growth and high unemployment have caused the deficit to rise.

Instead we should be implementing alternatives to cuts – closing the £120bn tax gap, borrowing to fund Keynesian investments in zero-carbon council housing, oil free public transportation and renewable energy resources, scrapping Trident, taxing the bankers who caused the crisis and the richest 1% of people in the country who have seen their wealth grow hugely over the past few years. 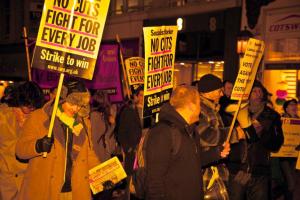 Between now and the next council meeting there will be events, actions and of course plenty of leafleting happening as we seek to draw some Labour councillors out to stand with their colleagues who have formed Councillors Against The Cuts, and to support our city and its people. On Tuesday 26th February there will be a day of action, starting with a picket of the council house from 12:30-1:30 before the council meeting starts at 2pm. Civil disobedience actions are being planned around the city centre throughout the afternoon to highlight particular cuts and the alternatives. There will be a mass demonstration in the evening.
Please invite your friends to this facebook event, and join us in the fight against austerity.

With thanks to Brian Sheridan, Brum Protestor, Geoff Dexter and Ben Hewitt for the photos.
More photos from the balcony and demonstration available on Indymedia

Filed under Alternatives to Cuts, Events