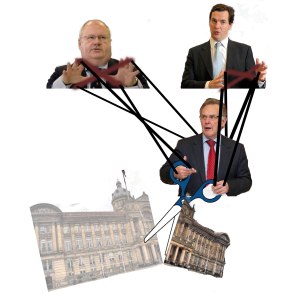 On Monday (4th Feb), the Labour group will be meeting to decide internally the budget proposal they will put forward to the full council meeting on the 26th Feb, detailing how they are going to make the £110m of cuts for the condem coalition. We didn’t vote for Labour to implement cuts, we voted for them to fight cuts. Austerity is self-defeating, with the economy looking to be heading for a triple dip recession as GDP shrunk by 0.3% last quarter, continuing the depression we are in, the worst recovery since the 1890s.

5pm
Monday 4th February
Meet outside Waterstones by the Bullring (corner of High st & New st). March to the council house from 5:30pm.
Please join and invite friends to the Facebook Event

A4 Leaflet available to print off, download by clicking here

Spread the message that huge sweeping cuts are being forced on us, disproportionate to the rest of the country. By 2018, Birmingham will have made £600m of savings – half the £1.2bn discretionary budget. £110 million of cuts will be made over the next year, while many rich Councils are getting off lightly. It is the poorest who are being made to pay the most – the average reduction in Government funding for councils as a whole is £74 per person. However, Birmingham’s reduction has been more than double the national average, at £149 per person. This is following on from huge and incredibly painful cuts already delivered – since 2010 there have been cuts of £275 million and a reduction in the number of staff by 27%.

On the 4th of February Albert Bore is proposing to the Councils ruling Labour Group that they will at the next Council meeting on February 26th pass a budget which contains huge cuts. The Labour party should be standing up for Birmingham against these cuts which put our economy into recession and tear away the last vestiges of the welfare state. However they have remained silent Albert Bore and the Birmingham Labour party have said they “accept austerity” and “understand the need for cuts” while other councillors have rejected austerity and cuts. At the same time as passing this huge cuts budget Albert Bore & the local Labour party has welcomed huge sums of local money being given subsidise the profits of major Corporations and are supporting Tory plans to give even more money to the rich by expanding the Greater Birmingham Local Area Partnership.