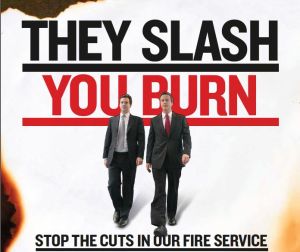 At our meeting last night, we had Steven, The Brigades Vice Chair from the West Midlands Fire Brigade Union along to tell us about cuts to the fire service.
Our next meeting will be on Monday 26th November from 6pm and will be specifically discussing the December 5th Demonstration and campaign strategy regarding the new council cuts.

You can listen to a recording of the talk and the following discussion here:

West Midlands Fire Service has already had 12.5% cuts to its budget in the past two years, leading to a doubling of response times to emergency calls. Now they have been told there will be further cuts in the next two years, which equate to an additional 14% cut nationally – but no details of what the exact settlements will be regionally. If the same formula as last time is applied, West Midlands Fire Service faces a whopping 29% cut in funding in the next two years – meaning over 40% of its 2010 budget will be lost.
The effect of this will be a continued increase in response times, the closure of fire stations, downgrades to vehicles that will mean smaller fire engines carrying just 3 firefighters – too few to safely tackle a house fire – and obviously redundancies amongst firefighters.
Many fire stations already operate only from 10am-10pm leaving very little cover at night, and further cuts will only put more lives at risk as frontline jobs are removed.

29% cuts to the fire and rescue service within the West Midlands in the next two years is going to cost lives. It’s as simple as that

The FBU are running a postcard campaign, asking everyone to get in touch with their MP to lobby them to get these cuts stopped and keep this emergency service running at the standard we pay taxes for. You can quickly email your MP using write to them, or email us to get some postcards..