British Heart Foundation May Be Withdrawing From Workfare As Demonstrations Continue 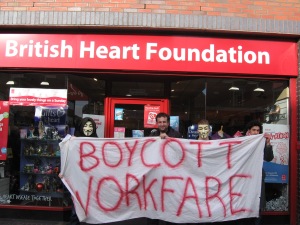 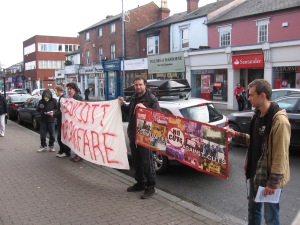 A demonstration against the use of forced workfare labour by companies and charities in Birmingham was held on Harborne high street yesterday, with the British Heart Foundation and Superdrug targeted for their support of the schemes which see unemployed and disabled people made to do unpaid work for up to six months or face benefits sanctions lasting up to three years. 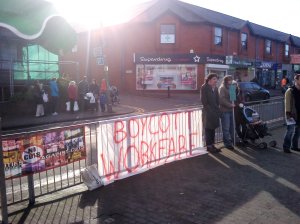 On Thursday we were contacted by the British Heart Foundation who told us they were “moving away from” the use of mandatory workfare placements, and that the Harborne store had not had anyone on placement since 1st November. They updated their website on Friday, and made a statement to the Guardian saying the same:

Currently,we are moving away from involvement in the mandatory work activity programme towards schemes which provide longer term voluntary placements. We have just established an important partnership with Job Centre Plus to actively promote volunteering as an option for people who are unemployed.

This vague wording has not been clarified – we asked what the timetable for withdrawal from mandatory work activity is, and which scheme(s) they are moving towards, but no answer has been forthcoming. British Heart Foundation also take placements from the mandatory Work Programme, but this is not specifically mentioned anymore, and they will not say what the new scheme(s) are so we can find out if they are truly voluntary. Johnny Void has written an excellent analysis of the possibilities which should be read. We have asked British Heart Foundation to answer 3 questions:

1) What is the timetable from withdrawal from MWA?
2) What involvement will you continue to have with the Work Programme?
3) What are the names of the new schemes that you will be participating in with the Job Centre?

With the way that the word “volunteer” has been abused in the past on workfare schemes, it is natural and right that we are skeptical of the British Heart Foundation’s move and need to know the details. However we welcome their withdrawal of support for the Mandatory Work Activity scheme which comes following a series of demonstrations around the UK against charity workfare, that will continue on 8th December with a national day of action.

The government has refused to publish a list of all the companies and charities that receive free labour courtesy of the taxpayer, and is appealing the information commissioners decision that the information must be released with the reasoning that:

The DWP considered that, of all the workfare programmes being described externally as ‘workfare schemes’, the MWA programme was the most likely to be influenced by pressure from campaign groups and negative publicity, given that MWA programmes were generally provided by charitable organisations … and the placements were mandatory,” lawyers said.

“Put simply, disclosure [of names] would have been likely to have led to the collapse of the MWA scheme, with incalculable losses to the taxpayer and many thousands of persons in long-term unemployment who are supported by the scheme

In other words, the DWP will not tell us who uses workfare because they know that charities and firms will pull out of the failing schemes, causing them to collapse. The support they claim to provide to unemployed people doesn’t help to reduce unemployment, and in the case of the work programme actually reduces people’s chance of finding work, with less than 4% of people getting jobs lasting 6 months or more.

We will be joining Boycott Workfare’s national day of action on 8th December, with a demonstration in Birmingham city centre. If the British Heart Foundation have clarified their position and are indeed withdrawing from mandatory schemes we will focus our demonstration on some of the companies who have particularly abused workfare over the Christmas period, replacing paid temps and worker with the free labour supplied by the job centre. 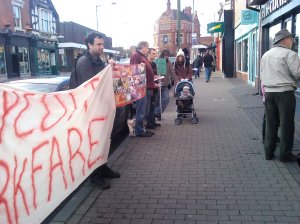