Our next organising meeting will be on Monday 8th October and Richard Hatcher will introduce a discussion about youth unemployment, with a talk of around 10 minutes followed by around half an hours discussion. After this will be organising items which will mostly be focused on the 20th October TUC national demonstration in London.

Youth Unemployment
6:30pm, Monday 8th October
Unison Offices, 19th Floor McClaren Tower, Priory Queensway, B4 7LR
Offices have level access and accessible toilets. Children are welcome to our meetings but we cannot provide a creche service, though there is enough space to set up a seperate table from the meeting you will need to bring something for them to do.
If you have any accessibilty needs or questions please contact us by email at BirminghamAgainstTheCuts@gmail.com 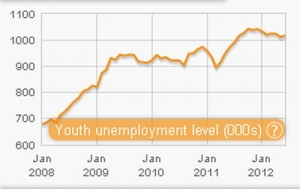 Whilst they are out of work, under-25s get a worse deal than older jobseekers – a lower rate of Jobseeker’s allowance (£56.25/week rather than £71/week), housing benefit limited to a shared house rate and more chance of being forced to work unpaid for private companies with extra schemes operating and a pilot scheme in London which can see young people sent out from the day they sign on.

With workfare the only game in town as far as the DWP are concerned, EMA scrapped, tuition fees raised hugely, colleges losing funding and Connexions only saved from closure through concerted strike action, young people are not getting the support they deserve. It is in this context that Birmingham City Council have launched a youth unemployment commission, which we hope will bring forward policies that will actually create useful jobs, and not just supply free labour to companies under an empty idea that experience is all that is necessary to get work in an economy where 800 people apply for 10 jobs at Costa Coffee in Nottingham.

So what is the picture locally? What do we need to do tackle this problem? Come along to our meeting to discuss this issue.