Come and Help With Leafleting Sessions for October Demonstrations 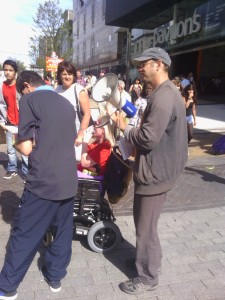 The demo at the Tory conference is just a month away and there’s just 6 week’s until the TUC demo in London. The Tories are doing their best to be hated by getting booed at the Paralympics when they bask in the efforts of others and by fiddling GCSE grades from our kids. And that’s just the most recent ones. This week’s TUC conference should pick up the pace regarding the demos and we want to ensure that people know that resistance is back on the agenda. 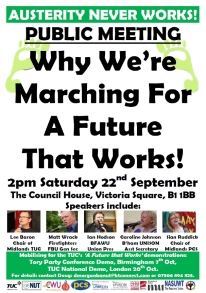 12 – 1:30pm Saturday 22nd Sept outside the Waterstones at the Bullring. This will be a ‘Placard Protest’ organised by Birmingham UNISON. People can come and write their message on a placard before we going on a practice protest around town up to the rally at the Council House. We are also hoping for trade union stalls to leaflet for the 22nd Sept Public meeting as well as for the 7th and 20th October demos.

In addition there will be leafleting for commuters in town between 4:30 -6pm on Wednesday 19th Sept and between 7:45-9am on Thursday 20th Sept. Both sessions will be at the bottom of the Ramp, New St.

Birmignham TUC are also looking at organising door to door leafleting and again would welcome people volunteering for any sessions/areas. So in Erdington they are meeting at 7pm on Thurs 13th Sept at the Charlie Hall pub (St Barnabus Rd – ring Stuart for details 07771567496). They have also organised a local stall from 11-1pm on Sat 22nd Sept meeting at the Co-op on High St Erdington.

If you can do a leafleting session on your local high street, let us know so that we can advertise it and because the unions have 10,000 leaflets advertising the demonstrations and public meeting on the 22nd, so we can supply you with all the leaflets you need.
When you are talking to people, make sure they know that austerity is failing and the deficit is rising, and what the alternatives are that we propose instead.