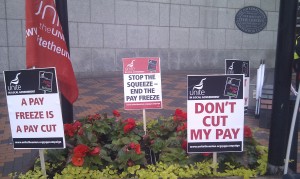 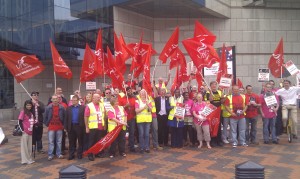 This is part of the People, Pay, Pensions campaign that the union is running.
Local Government workers have seen pay decrease by 11% in real terms as a third year of pay freezes takes place. Local government workers are not even being offered the £250 raise that other public sector workers are seeing. The employers are refusing to take part in discussions over the pay claims.

The demonstration heard from Unite officials and workers who spoke about the cuts.

A Unite official spoke about how local government employers are refusing to take part in talks, because they know that they are in the wrong for imposing pay freezes.

The employers have not enough honoured to agreement they have got in that they have refused to go to arbitration. The reason I believe that have refused to do that is because in reality they know that any arbitrator would find in favour of local government workers

It’s now time to say enough is enough .. we need to stand united together … we will be stood in the face of employers from now till doomsday to get what we deserve, and what we deserve is a decent pay rise and pension

A youth worker from Lancashire said:

If we don’t do this, the generation that follow us are just going to have nothing. Never mind the big society, never mind investing in the future. Trade unionism if it works and we work in solidarity to protect. You’d think you were trying to grab something things that’s not ours, pay cuts are ridiculous because we can’t afford to buy the things in the local shops and communities that allow the jobs are there in the first place

An excellent demonstration for a group of workers who are under heavy attack both locally and nationally from the swinging council cuts imposed by the ConDem coalition.