Taking the Gloves Off – A Festival of Song, Theatre and Debate for a Better World 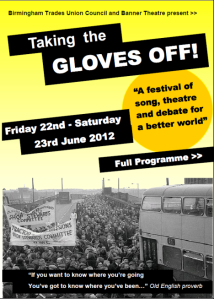 On Friday 22nd and Saturday 23rd June, Birmingham Trades Union Council and Banner Theatre present Taking The Gloves Off. You can view and download the (folding) flyer by clicking here for the PDF

2012 is the 40th anniversary of the historic working class victory of Saltley Gate, closing the huge Saltley coke depot and helping win the 1972 strike for the miners.

At a time of unprecedented attacks on our living standards and welfare state, Taking the Gloves Off looks at key battles and victories of the past – not in nostalgia but seeking ideas for winning a better world for the future.

In 1972 the Tory government introduced the Industrial Relations Act aiming to make workers pay for the crisis of capitalism. Resistance followed. The miners, with solidarity from 30,000 Birmingham engineers striking in support, broke the wage restraint and put the Tory government on the defensive. Now more than ever we need to learn lessons on how to win.

Taking the GLOVES OFF!

Please join and invite your friends to the Facebook event

Dave Rogers and Fred Wisdom tell the story of Saltley Gate – a key battle in the 1972 miners’ strike – in song, music and cabaret.
Based on extensive interviews with miners, car workers and factory workers recorded by Banner in 1972 and in 2012, this multi-media production connects a key trade union battle to the major struggles of today.

WORKSHOP
Remembering where we’ve been…

What tactics and strategies were (and were not) successful in the heady days of 1970s trade unionism – Saltley Gate, the UCS occupation, the Pentonville Five, car workers, and the 1972 building workers strike?
What are the practical lessons for our class to take into today’s struggles such as the sparks dispute and defence of pensions? How can they be applied in today’s conditions?
Plus guest speaker from Greece

Even union general secretaries and MPs know that direct action works.
Solidarity and diversity of tactics get the goods, from the docks of Oakland to the students of Glasgow University’s victorious Hetherington occupation.
Plus guest speaker from Egypt Mostafa Bassiouny, journalist from Al-Tahrir newspaper

3 responses to “Taking the Gloves Off – A Festival of Song, Theatre and Debate for a Better World”