Communities Against The Cuts, March/Rally and Social on 27th April

Communities Against The Cuts, who are standing candidates in the Kings Norton and Bournville wards for the council elections on May 3rd, are holding a rally and march, followed by a social event on Friday 27th April.

The rally, demonstrating against cuts in the wards concerned and to raise the profile of their candidates, meets at 5:30pm outside Kings Norton Leisure Centre, where speakers will talk about the effect of cuts on local services, before proceeding along the Pershore Road to the Cotteridge Neighbourhood Office, where Stirchley and Cotteridge Against The Cuts began their campaign, and then to the Stirchley Community School to hear about the privatisation of our education services.
The march will finish opposite Stirchley Library, at the group’s campaign offices.

After the rally, they will go across the road to the British Oak for a social event with music and comedy from No More Numbers, The Inebriati and Barbara Nice.
The social event begins at 7:30pm and you are welcome to come to that whether you can make the rally or not. Entrance to the event is £5 / £3 concessions. 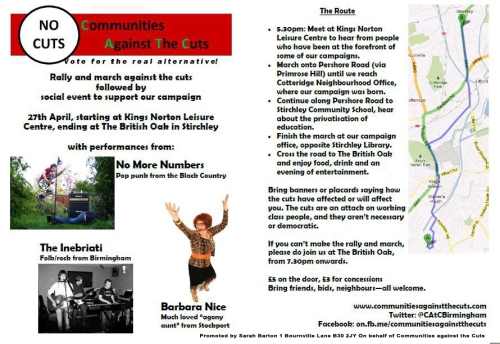 Filed under Events, Stirchley and Cotteridge Against the Cuts

One response to “Communities Against The Cuts, March/Rally and Social on 27th April”