On Wednesday 30th November, 15,000 people assembled in Birmingham and marched through the city centre to the NIA. The council tried to stop it, by asking for £10,000 to march, but the unions and the people refused to pay, and marched anyway.

The demonstration, against changes to pensions which will see public sector workers work longer and pay more to get less in order to fund the deficit, against the cuts which the pension changes form part of, and for the alternative to the austerity economics of this coalition government.
We have already had a report from Stirchley and Cotteridge Against the Cuts, and some pictures from pickets around Birmingham. This post has photos of 30th November demonstration and rally. We still want more photos, especially of picket lines and any unions’ that we have missed at the demo.
Email them to BirminghamAgainstTheCuts@gmail.com 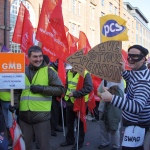 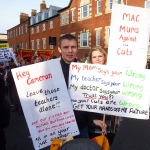