Alternatives to the Cuts: Will Austerity Solve the Deficit Problem?

This post is going to explore what effect the austerity agenda being pursued by the government is likely to have on the levels of deficit and debt for the UK government.

The problem, so we are told, is that the government is spending too much money.  We are borrowing in an unsustainable fashion and our deficit – the amount of money we need to borrow each month or year – is spiralling out of control.  This means that our national debt – the amount of money that we owe in total – is rising to a point where we might face a sovereign debt crisis.

I’m going to explore how true that is in another post, but for now let us accept that this is more or less true.  Let us say that we do need to reduce the deficit, and in a serious manner, in order to avoid the problems that we can see happening in Greece, Portugal, Spain, Italy and Ireland whose credit ratings are being downgraded, and their governments are being forced to borrow even more money – or possibly default on debts.

The question we must ask is will cutting spending solve this problem, and in this post I am going to outline some of the reasons why it won’t.  Don’t just take my word for it, have a look at what some of the experts have to say.

First off, some graphs:

This graph shows the level of debt as a % of GDP (the inset shows from the start of the 20th century).  You can see that right up until the point that Northern Rock collapsed, the debt was at a lower level than for much of the time under Thatcher.

This graph shows changes in the deficit level.  One thing that is clear from this is that recessions (ie: the recession in the early 1990s) increase the size of the deficit, whilst in periods of growth (such as the late 80s, or late 90s/early 00s) act to reduce the deficit.

So we can say that if we want to reduce the deficit, the last thing we want is a recession – or at least, a recession would be unhelpful in our pursuit of deficit reduction. Conversely we can say that strong growth – in particular the kind of growth which comes from increases in employment – would be helpful.

So what’s been happening to GDP recently? 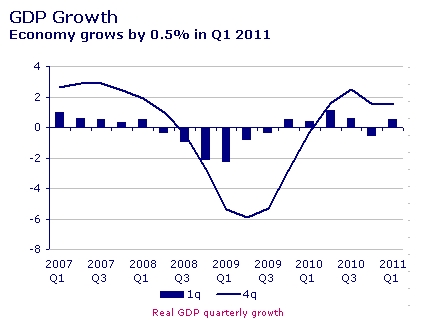 This graph shows changes in GDP – the bars are for that quarter, whilst the line shows an average of the previous year.  You can see the recession following the banking collapse with a fall of nearly 6% in GDP between 2008 & 2009.  Then there is a recovery, towards the end of 2009.  It should be noted however that this growth did not produce a significant fall in unemployment nationally (although interestingly, and something I didn’t know until I saw that graph, the West Midlands did see a fall in unemployment in that period).

Then something happens around Q2 of 2010.. sometime between March and April the GDP growth peaks (can you think of any significant event happening between March and April 2010?), and although there is GDP growth in Q3 2010, it is less than the previous quarter.  OK, seasonal variation, nothing significant it just happens to be less.. but then in Q4 2010, there is actual shrinking of the economy of -0.5%.  Osborne blamed the snow, but the following quarter saw growth of just 0.5%, which means that the bounceback effect of deferred spending from the previous quarter was not enough to produce growth over the 6 months following the budget review which revealed the true scale of cuts that the ConDems are planning.  Technically not a recession, as that requires two consecutive quarters of contraction in the economy, rather than an average over 6 months.

The next quarter’s initial figures will be out in the next week or so, but indications put it at 0% to 0.3%, hardly the kind of levels of growth required to put the economy back on track, and produce the growth and jobs that would provide an increase in taxation revenues, and a reduction in benefit payments for the government, and which would naturally reduce the level of deficit until – just like after the recession in the 90s – we reach a point where we are running at a surplus and paying off that debt.

At some point I’ll write a post that explores more theoretically why cutting spending at this point in the economic cycle, and in the circumstances the world, and particularly some of our close neighbours, find themselves in will not produce growth, as Paul Krugmann (Nobel Prize winner for Economics, 2008) argues.

I will highly recommend Krugmann’s blog – although focussed on the USA, he provides an important source of information – sometimes his posts are very technical, but often they are highly accessible and useful in giving yourself the information you need to win arguments about spending cuts.

So we can see that the economy has gone from moderate growth to flatlining between Q4 2010 and (presumably) Q2 2011 – in the 9 months since the ConDems budget review revealed the scale of cuts to come.  In that time we have also had a rise in VAT, and council budgets around the country revealing the job losses and pay cuts to come in local government.  People around the UK are very aware that if they, or someone they know, works in the public sector they might well lose their job, or face a pay cut.  Because of this, we have cut back our spending.  This decreases demand, and in doing so puts the private sector at risk.  Recently we have seen a slew of high street names entering administration, and construction industry growth slowing as well – often an early indicator of trouble to come.

So far from growing to fill the space that the public sector has left (the idea being that the public sector is “crowding out” the private sector), the private sector may well shrink as well.  This could lead to another recession (the “double-dip recession”), and another recession will mean that the deficit will rise as tax income falls and welfare payments rise.  Whether spending cuts can keep pace with those factors is not the question, the question is whether there is a solution (or group of solutions) that can reduce the deficit without producing recession – these are the alternatives to cuts, and I will be producing posts detailing each of them.

This strand of discussion also links heavily to one of the alternatives that will be discussed in a future post – policies for growth.

Filed under Alternatives to Cuts

8 responses to “Alternatives to the Cuts: Will Austerity Solve the Deficit Problem?”