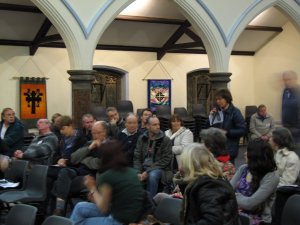 Yesterday, 42 people attended a meeting organised by Stirchley and Cotteridge against the cuts, to hear the administrator of Cotteridge Church day centre and the steward at the local neighbourhood office talk about how the Birmingham Con-Dem council’s plans will hit some of the city’s most vulnerable people. Also in attendance were Labour MP Steve McCabe and Tory councillor Nigel Dawkins.

The day centre administrator said: “this day centre is the only 5 day a week preventative service within a 5 mile radius” and she explained how, despite the fact they’ve been the heart of a community for 25 years, the council wrote them and other day centres a letter saying that the £64k grant, which is peanuts for a council the size of Birmingham, will be withdrawn in April.

Due to a massive outcry and coverage in the Birmingham Mail the service has now been offered a “bridging grant” for April to September, however the size of this grant is unknown and come September they will need to apply for further funding from a smaller pot of money. The future remains uncertain, which is why the campaign continues.

The neighbourhood office steward told how, as part of the future operating model, half the neighbourhood offices where people get help and advice with housing, debt and benefits amongst other issues, will be closed. He said “staff numbers are being reduced at a time when it is already taking up to 3 weeks to get an appointment.”

This means the closure of local offices and their merging and replacement with “super offices” covering bigger and bigger areas of the city, based on promises of future funding yet to materialise. These are closures and cuts not upgrades, which is why neighbourhood office staff voted 130/1 last Thursday to ballot for strike.

Dawkins tried to hide behind the argument that these are “difficult times”, that the reductions are “not of our own making” and it is his “duty” to vote for the cuts. He even tried to sell the cuts to neighbourhood offices as “an improvement”.

He had clearly turned up at the wrong meeting. Feelings started to run very high as people felt the councillors had no mandate for the cuts. Dawkins was asked why he had come at all, if he felt he had no choice but to vote for the cuts. When Dawkins said it wasn’t his decision but was up to the cabinet member (also a Tory), people called on him to “do the right thing” and resign, saying “you either take our views to the council or you’re not doing your job properly”.

McCabe did not engage with the issue of neighbourhood offices, but he did agree to sign up to a statement drafted by the day centre stating that it is a vital service which must not be closed.

The meeting has raised the stakes for local politicians, who now know that whenever a cut is announced local people will be ready to campaign to stop it.

The Con-Dem goverment has already shown they are vulnerable to U-turns when it comes to forests, housing benefit and debt advice. The same should apply to their poodles in Birmingham.

The meeting resolved to continue the pressure and to attend the anti cuts protest in Birmingham this Saturday and at the budget setting meeting on March 1st.

Filed under Cuts, Events, Stirchley and Cotteridge Against the Cuts